The Triumphal Arch, located at the entrance to the town, where most tourists and guests to Dikanka are greeted. This arch was built in 1820 to commemorate the visit of the Russian Emperor, Alexander I in 1817. 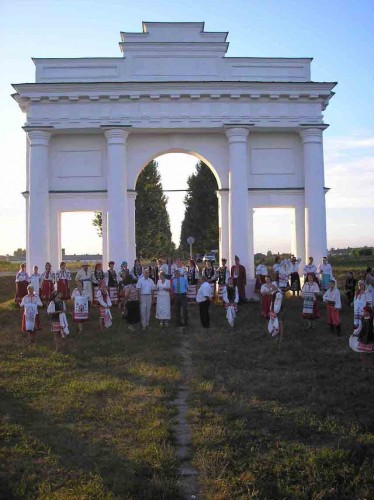 When this archway was built, it served as an entrance to the estate of the family Kochubay. Kochubay was the famous Cossack commander who betrayed Hetman Mazepa and whose treason helped the Russian Emperor subdue Ukraine. The arch was designed by an academic of architecture Mr. Luigi Ruska. Mr. Ruska has many famous architectural creations in Saint Petersburg including the Bobrinsky Palace. He is also responsible for the design of several Triumphal Arches in Russia commemorating the victory in the Patriotic War of 1812. The Triumphal in Dikanka is the only one in Ukraine, and stands as Dikankanka’s local cultural symbol of the triumphant victory in the Patriotic War of 1812 over the French. It is said that the heros of Gogol’s novels offer Varennekys (pierogies) and accompany guests through the arch as an invitation to them to visit this nice historical Province