Gogol’s early works, such as Evenings on a Farm Near Dikanka, were heavily influenced by his upbringing in Malorossii and identity. Yet, the writer is often called the «father of modern Russian realism.” 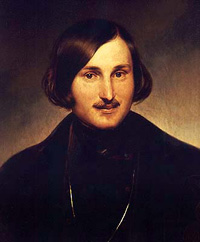 He was one of the first writers to criticize his country’s way of life. The novels Taras Bulba (1835) and Dead Souls (1842), the play The Inspector-General (1836, 1842), and the short stories Diary of a Madman, The Nose and The Overcoat (1842) are among his best known works. With their scrupulous and scathing realism, ethical criticism as well as philosophical depth, they remain some of the most important works of world literature.

On the night of February 24, 1852 , he burned some of his manuscripts, which contained most of the second part of Dead Souls. He explained this as a mistake — a practical joke played on him by the Devil. Soon thereafter he took to bed, refused all food, and died in great pain nine days later.

Gogol was buried at the Danilov Monastery, close to his fellow Slavophile Aleksey Khomyakov. In 1931, Moscow authorities decided to demolish the monastery and had his remains transferred to the Novodevichy Cemetery.

His body was discovered lying face down, which gave rise to the story that Gogol had been buried alive. A Soviet critic even cut a part of his jacket to use as a binding for his copy of Dead Souls. A piece of rock which used to stand on his grave at the Danilov was reused for the tomb of Gogol’s admirer Mikhail Bulgakov.