On the south border surrounding the village of Dikanka, near the forest, is located Mikolaivska Church. It was built in the year 1794 by a well — known architect, M.O. Lviv, in a classical style. 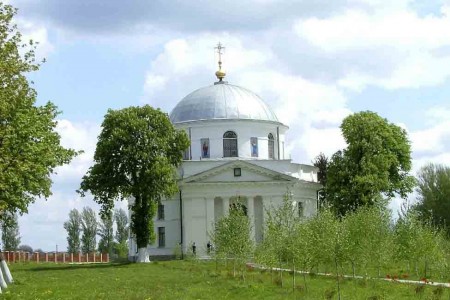 Lviv was the first to apply the style of the double rotunda. Later, another double rotunda was also built on the famous Kasan Cathedral in St. Petersburg. Mikolaivska Church was founded in the 17th century according to the benediction of Lazar Baranovich (the archbishop of Chernihiv). And still today, people remember the miracle of the icon of St. Nick (for which the church is named), and the several impressive oak iconoclasts nearby. Beneath the church you will find the Kochubay family burial vault. Buried here are five men and three wives of Ukrainian Cossack royalty.